Government schools to be upgraded PM-SHRI schools (PM Schools for Rising India) will be developed as ‘green schools’ and will teach children about the country’s heritage and inculcate the values ​​of ‘Bharat’, the Union Education Ministry has told all states in a letter .

The schools will make students proficient in Indian languages ​​and will also work to “link students with local industry for skill development,” the letter said.

“The union ministry has further said that the online portal will be opened from October 1 to November 30 and during this period government schools in the state can apply to participate in the process of selection for upgradation as PM-SHRI schools,” said a senior. said an official of the Punjab education department.

Under the scheme, the Prime Minister Narendra Modi-led government aims to develop at least 14,500 existing government schools in the country.

Regarding the selection process, the letter states that the schools will be selected for the PM-SHRI through a “challenge mode”, that is, the schools will have to submit the application on the portal that is It will open four times a year, once every quarter, during the first two years of the program. A maximum of two centers (one primary and one high school) will be selected per block/urban local body. However, not all government schools will be eligible to participate in the challenge, according to the letter. States must first sign a memorandum of understanding (MoU) with the union ministry “setting out commitments to implement the National Education Policy (NEP), 2020”. Schools will then be identified for eligibility by checking whether they meet the requirements of certain Unified District Information System for Education (UDISE) data parameters.

The letter clarifies that no predefined target has been set for the number of schools to be selected and that the results of the ‘challenge’ will determine how many schools are ultimately selected for the programme. 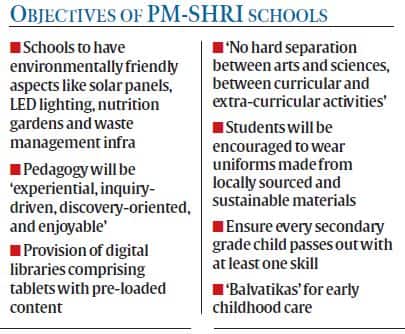 “These schools will be learning spaces in which each student feels welcomed and cared for,” the letter says, adding that, as part of the program, primary schools (from 1 to 8) and high schools (from 6 to 12) managed by the state/centre. be considered

Notably, the Aam Aadmi Party (AAP) government in Punjab has started the process of selecting 100 government schools to be upgraded as ‘Schools of Eminence’ on the lines of the ‘Delhi model of education’. School Education Minister Harjot Singh Bains has been visiting schools across the state and the state education department has conducted a statewide survey to collect data on infrastructure, staffing and the provision of basic services. in Punjab Government Schools.